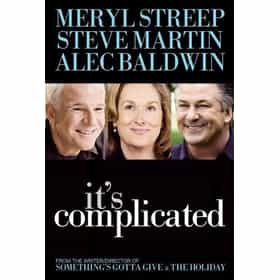 It's Complicated is a 2009 American romantic comedy film written and directed by Nancy Meyers. It stars Meryl Streep as a successful bakery owner and single mother of three who starts a secret affair with her ex-husband, played by Alec Baldwin, ten years after their divorce – only to find herself drawn to another man: her architect Adam. An ensemble film, the R-rated adult comedy also features supporting performances by Lake Bell, Hunter Parrish, Zoe Kazan, John Krasinski, Mary Kay Place, Robert Curtis Brown and Rita Wilson, among others. The film was met with mixed to average reviews by critics, who declared it rather predictable despite fine work by an appealing cast, but became ... more on Wikipedia

It's Complicated is ranked on...

It's Complicated is also found on...