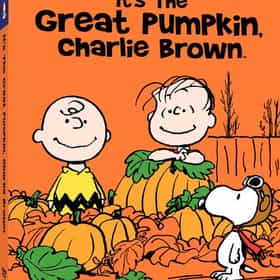 It's the Great Pumpkin, Charlie Brown

It's the Great Pumpkin, Charlie Brown is a 1966 American prime time animated television special based on the comic strip Peanuts by Charles M. Schulz. A Halloween special, it was the third Peanuts special to be produced and animated by Bill Melendez. It was also the first Peanuts special to use the titular pattern of a short phrase, followed by "Charlie Brown", a pattern which would remain the norm for almost all subsequent Peanuts specials. Its initial broadcast took place on October 27, 1966, on CBS, preempting My Three Sons. CBS re-aired the special annually through 2000, with ABC picking up the rights beginning in 2001, where it now airs annually at Halloween. Until 2013 ... more on Wikipedia

It's the Great Pumpkin, Charlie Brown is ranked on...

#131 of 599 The Best Animated Films Ever 917.7k VOTES The best animated movies of all time are an assortment of animated movies that rank among the best movies ever made. Wh...
#1 of 103 The Best Halloween Movies for Kids 29.7k VOTES Halloween movies for kids include some holiday classics and some newer films that are quickly becoming classics. The best Ha...
#110 of 312 The Best Movies for Kids 199.4k VOTES If you have kids, you know you are always on the lookout for a movie that they will love and that you can sit through withou...
#2 of 84 Great Movies That Take Place in Autumn 5.8k VOTES Colorful leaves and cool breezes make fall many people's favorite time of year. Maybe that's why it's such a popular setting...
#6 of 84 The Best Pumpkin Things 19.7k VOTES It's the most wonderful time of the year: the time when pumpkin things are on the shelves (even though it's still like 90 de...
#2 of 11 The Best Movies and Series in the Peanuts Franchise 71 VOTES These are the best Peanuts movies and series the franchise has to offer. There are both CGI and traditionally animated films...
#44 of 216 The Very Best Shows That Aired in the 1960s 92k VOTES List of the best television programs from the 1960s, as ranked by television fans. It was in the 60s that television first b...
#10 of 61 The Best Comedy Movies of the 1960s 6.7k VOTES The 1960s was a great decade for comedy. With the counterculture flourishing, the Cold War looming, and tensions in Vietnam ...
#14 of 36 The Best 1960s Family Movies 1.7k VOTES The hills are alive with the sound of '60s family movies. Some of the best family films ever made are here on this list of 1...
#7 of 50 The Best Kids Movies of the 1960s 4k VOTES In the 1960s, musicals were king. On this list of the greatest 1960s kids movies, you will see a number of enduringly popula...
#6 of 40 The Best '60s Cartoon Movies 1.6k VOTES In the 1960's, Looney Tunes and Charlie Brown reigned supreme. The Beatles came out with their trippy, visual, musical exper...
Premiere's Hollywood's Evergreen Halloween Movies 7.7k VIEWS Premiere's list of the top Halloween movies. These are classic Halloween movies that need to be watched. For the full articl...

It's the Great Pumpkin, Charlie Brown is also found on...