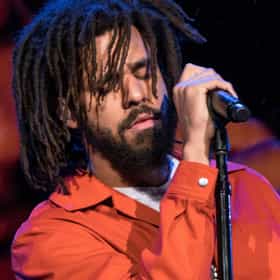 Jermaine Lamarr Cole (born January 28, 1985) is an American rapper, singer, songwriter, and record producer. Born on a military base in Germany but raised in Fayetteville, North Carolina, Cole initially gained recognition as a rapper following the release of his debut mixtape, The Come Up, in early 2007. Intent on further pursuing a solo career as a rapper, he went on to release two additional mixtapes, The Warm Up and Friday Night Lights after signing to Jay-Z's Roc Nation imprint in 2009. Cole released his debut studio album, Cole World: The Sideline Story, in 2011. It debuted at number one on the U.S. Billboard 200, and was soon certified platinum by the Recording Industry ... more on Wikipedia

The Best Songs Feat. J. Cole 1.2k votes These are the best songs featuring J. Cole. As a solo artist, J. Cole has won awards (BET Hip Hop Award for Album of the Yea...
The Best Rappers To Listen To If You Like J. Cole 1.4k votes If you're a fan of J. Cole, here is a list of rappers who make similar music. Known for his story telling and rapping about ...
The Best Songs on J. Cole's Album KOD 3.3k votes If you listened to the new J. Cole album, make your KOD review by ranking all the songs from best to worst. The fifth studio...
The Best J. Cole Albums, Ranked 1.2k votes Hip hop fans, we're ranking the best J. Cole albums of all time. One of the best rappers of 2018, J. Cole's discography has ...