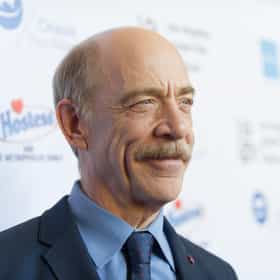 Jonathan Kimble Simmons (born January 9, 1955) is an American actor and voice actor. In television, he is known for his work as Dr. Emil Skoda on the NBC series Law & Order, Vernon Schillinger on the HBO series Oz and Assistant Police Chief Will Pope on TNT's The Closer. From 2017 to 2018, he starred as Howard Silk in the Starz series Counterpart. His notable film roles include J. Jonah Jameson in Sam Raimi's Spider-Man trilogy (2002–2007) and in the Marvel Cinematic Universe film Spider-Man: Far From Home (2019), and music instructor Terence Fletcher in Whiplash (2014). He is known for voicing Cave Johnson in the video game Portal 2 (2011), Tenzin in The Legend of Korra ... more on Wikipedia

#56 of 282 People who voted for J.K. Simmons... also upvote Breaking Bad on The Best TV Shows to Binge Watch also upvote X-Men Franchise on The Best Movies of All Time The Best (Male) Actors Working Today 1.5M VOTES The best actors working today include Hollywood legends, Academy Award winners and many of the top up and coming actors in t...
#300 of 1,149 The Best Actors in Film History 2.2M VOTES The best actors ever are ranked here in this list of the best actors in film history. These are the greatest actors ever to ...
#109 of 122 The Worst Oscar-Winning Actors Ever 234.4k VOTES Bad actors who have won Oscars, in any category, as determined by the votes and selections of Ranker users. This list contai...
#34 of 257 The Best Marvel Movie Actors Ever 578.7k VOTES Ah Marvel movies. It began in 1944 with serialized films of Captain America and 70 years later, are one of the biggest, most...
#132 of 179 The Best Living American Actors 268.4k VOTES It takes a lot to make a movie great. There has to be excellent writing, production, direction, editing, and of course, acti...
#52 of 115 The Greatest Film Actors Of The 2010s 31.7k VOTES Who were the best actors of the 2010s? This list will highlight 2010s actors, from Oscar regulars like Bradley Cooper and Ch...
#40 of 78 The Best Film Actors Who Got Famous on TV First 13.6k VOTES This is a list of famous film actors who got famous on TV first, as ranked by experts and fans alike. There are many route...
#20 of 56 The Best Marvel Superhero Movie Actors 101.8k VOTES Comic book movies are especially hard to cast because there are so many die hard fans of these characters who see them all t...
#5 of 20 Casting Call for Spider-Man 12.2k VOTES With Sony and Marvel Studios parting ways, it looks like there's going to be another Spider-Man reboot. Again. Maybe. Who sh...
#2 of 20 The Top Actors Who Should Play J. Jonah Jameson 4.3k VOTES J. Jonah Jameson has been left out of the Marc Webb Spider-Man films, and for good reason. J.K. Simmons, who played the char...
#1 of 9 The Best Actors Who Played J. Jonah Jameson 326 VOTES We're ranking the best J. Jonah Jameson actors of all time. J. Jameson is the staunch and often hot-headed editor-in-chief o...
Every Person Who Has Hosted 'Saturday Night Live' 49.6k VIEWS Live from New York! It's Saturday Night! This is a list of all Saturday Night Live hosts, in reverse order,...
#103 of 156 The Best People Who Hosted SNL In The 2010s 1.4k VOTES Despite cast changes, Saturday Night Live in the 2010s found a new kind of balance and settled comfortably into their cold o...
#11 of 25 The Best Law & Order Actors 379 VOTES The Law & Order cast consists of some of the most recognizable faces in America due to the show's success not only durin...
The Most Extreme Body Transformations Done for Movie Roles 6.7M VIEWS The most committed movie stars have no problem drastically changing their bodies for film roles. Oscar winners like Christia...
The 20 Actors In The Most Coen Brothers Movies 10.8k VIEWS Joel and Ethan Coen love to repeatedly use the same actors in their films. Six different actors have appeared in four or mor...
Famous People Who Use Initials In Their Names 76.2k VIEWS Sometimes, people decide that they want to be called by their initials instead of their full names. Here is a list of famous...