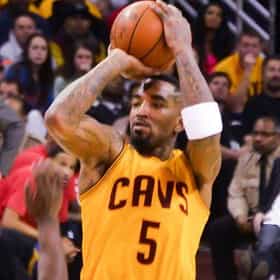 Earl Joseph "J. R." Smith III (born September 9, 1985) is an American professional basketball player who last played for the Cleveland Cavaliers of the National Basketball Association (NBA). He played high school basketball at New Jersey basketball powerhouse Saint Benedict's Preparatory School in Newark. He entered the NBA out of high school after being selected in the first round of the 2004 NBA draft with the 18th overall pick by the New Orleans Hornets. He has also played for the Denver Nuggets and New York Knicks, as well as for the Zhejiang Golden Bulls of the Chinese Basketball Association. In 2016, Smith helped the Cavaliers win the NBA championship ... more on Wikipedia