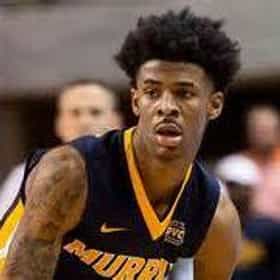 Temetrius Jamel "Ja" Morant (born August 10, 1999) is an American professional basketball player for the Memphis Grizzlies of the National Basketball Association (NBA). He played college basketball for the Murray State Racers, where he was a consensus first-team All-American as a sophomore in 2019. He was selected second overall by the Grizzlies in the 2019 NBA draft. Born in Dalzell, South Carolina as the son of former basketball player Tee Morant, Ja Morant was lightly recruited by NCAA Division I programs and unranked by recruiting services despite earning All-State distinction at Crestwood High School in Sumter, South Carolina. He made an immediate impact at Murray State, ... more on Wikipedia

Ja Morant is ranked on...