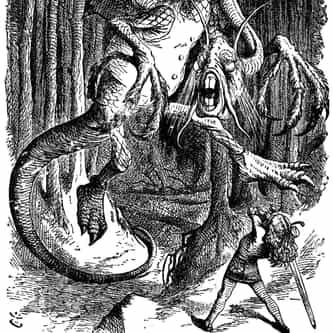 Jabberwocky is a nonsense poem written by Lewis Carroll and included in his 1871 novel Through the Looking-Glass, and What Alice Found There, a sequel to Alice's Adventures in Wonderland. The book tells of Alice's adventures within the back-to-front world of a looking glass. In an early scene in which she first encounters the chess piece characters White King and White Queen, Alice finds a book written in a seemingly unintelligible language. Realising that she is travelling through an ... more on Wikipedia