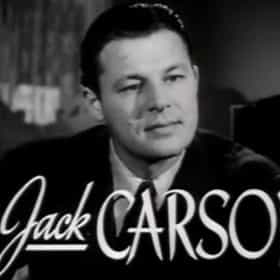 John Elmer "Jack" Carson (October 27, 1910 – January 2, 1963) was a Canadian-born, American film actor. Though he was primarily used in supporting roles for comic relief, his work in films such as Mildred Pierce (1945) and Cat on a Hot Tin Roof (1958) displayed his mastery of "straight" dramatic actor roles as well. He worked for RKO and MGM (cast opposite Myrna Loy and William Powell in Love Crazy, 1941), but most of his memorable work was for Warner Bros. His trademark character was the wisecracking know-it-all, typically and inevitably undone by his own smug cockiness. ... more on Wikipedia

Jack Carson is ranked on...

Jack Carson is also found on...