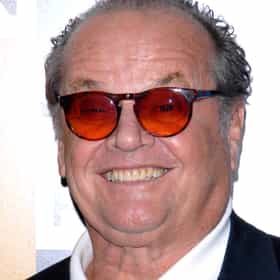 John Joseph Nicholson (born April 22, 1937) is an American actor and filmmaker who has performed for over sixty years. He is known for playing a wide range of starring or supporting roles, including satirical comedy, romance, and darkly comic portrayals of anti-heroes and villainous characters. In many of his films, he has played the "eternal outsider, the sardonic drifter", someone who rebels against the social structure.His most known and celebrated films include the road drama Easy Rider (1969); the dramas Five Easy Pieces (1970) and One Flew Over the Cuckoo's Nest (1975); the comedy-dramas The Last Detail (1973), Terms of Endearment (1983), As Good as It Gets (1997), ... more on Wikipedia

Jack Nicholson is ranked on...

Jack Nicholson is also found on...