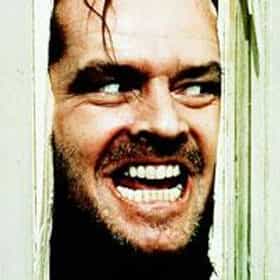 John Daniel "Jack" Torrance is a fictional character in the 1977 novel The Shining by Stephen King. He was portrayed by Jack Nicholson in the 1980 movie adaptation of the novel, and by Steven Weber in the 1997 miniseries. The American Film Institute rated the character the 25th greatest film villain of all time. In 2008, Jack Torrance was selected by Empire Magazine as one of The 100 Greatest Movie Characters. Premiere Magazine also ranked Torrance on their list of The 100 Greatest Movie Characters of All Time. He is the father of Daniel Torrance. ... more on Wikipedia

Jack Torrance is ranked on...

#7 of 74 The Most Utterly Terrifying Figures in Horror Films 155.7k VOTES This is a list of the most chillingly terrifying figures in film, as ranked and voted on by horror fans. There are a lot of ...
#4 of 14 The Worst Horror Movie Parents 336 VOTES Horror movies are full of awful parents. Since the genre heavily features protagonists who are teens or young adults, h...
#12 of 13 Horror And Suspense Film Villains Who Are Really Good At Their Day Jobs 196 VOTES If you want to make an effectively scary movie, it helps to give your horror villains day jobs. It means the fiend could be ...
#8 of 16 Which Stephen King Villain Would Win In A Battle Royale? 2.9k VOTES The work of Stephen King forms not only a dense canon of horror, science fiction, and fantasy stories, but also a new f...
#1 of 14 The Biggest Drunks in Literature 114 VOTES Warning: The following list smells like a distillery. The expression “write what you know” is an apt one here; many of the a...
#2 of 17 The Greatest Possessed Characters in Film 1.4k VOTES The idea of someone – or something – controlling your thoughts and actions is one of the oldest horror stories ever told. Fr...
#2 of 17 The Greatest Characters Played by Jack Nicholson, Ranked 1.3k VOTES This list contains information on the best characters played by Jack Nicholson ranked from best to worst by user votes. Th...
#4 of 35 The Best Fictional Characters Who Turn Evil 7.5k VOTES There are thousands of villains in fiction, from television, books, comics, and film, each with their own unique motives and...
#1 of 18 The Greatest Novelist Characters in Film 89 VOTES Whether they're successful authors or beginners struggling to complete their first manuscripts, fictional novelists have cap...
#7 of 105 Fictional Characters Named Jack 6.9k VOTES List of notable fictional characters whose name is Jack, including photos when available. The fictional characters named Jac...
#5 of 25 The Greatest '80s Horror Villains 649 VOTES Lock the door, grab a friend, and turn on all the lights as we rank the best 80s horror villains. The 1980s saw a surge of h...
Which Stephen King Character Are You, Based On Your Zodiac Sign? 239k VIEWS Stephen King has created many memorable characters - it's fun to arrange them by their zodiac signs. King's literary ca...
#1 of 13 The Best Characters In The The Shining TV Show 52 VOTES The Shining miniseries aired on ABC in 1997 over the course of three nights. Why the need for the small screen adaptation? S...
#1 of 11 The Best Characters In The 1980 The Shining Movie 72 VOTES Stanley Kubrick’s The Shining, adapted from the Stephen King novel, may not have been a big box office hit when it was relea...