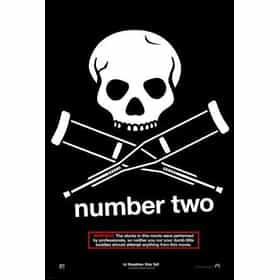 Jackass Number Two is a 2006 American reality comedy film. It is the sequel to Jackass: The Movie, both based upon the MTV series Jackass. Like its predecessor and the original TV show, the film is a compilation of stunts, pranks and skits. The film stars the regular Jackass cast of Johnny Knoxville, Bam Margera, Chris Pontius, Steve-O, Ryan Dunn, Dave England, Jason "Wee Man" Acuña, Preston Lacy and Ehren McGhehey. Everyone depicted in the film plays as themselves. All nine main cast members from the first film returned for the sequel. The film was directed by Jeff Tremaine, who also directed Jackass: The Movie and produced Jackass. The film was produced by Dickhouse ... more on Wikipedia

Jackass Number Two is ranked on...