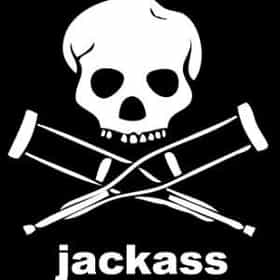 Jackass is an American reality series, originally shown on MTV from 2000 to 2002, featuring people performing various dangerous, crude, self-injuring stunts and pranks. The show served as a launchpad for the television and acting careers of Bam Margera, Steve-O, and also Johnny Knoxville, who previously had only a few minor acting roles. Since 2001, three Jackass films have been produced and released by MTV corporate sibling Paramount Pictures, continuing the franchise after its run on television. The show sparked several spin-offs including Viva La Bam, Wildboyz, Homewrecker, Dr. Steve-O, Nitro Circus and Blastazoid. The show placed #68 on Entertainment Weekly '​s "New TV ... more on Wikipedia

All The Members Of Jackass: Where Are They Now? 1.5M views Any person who pushing the outer edges of being a millennial remembers growing up with MTV's Jackass. The highly entertainin...
The Gnarliest, Most Ingeniously Stupid Jackass Stunts Ever Attempted 2.1k votes In the early aughts, if you possessed both cable and a bit of schadenfreude, you definitely caught the biggest stunts on Jac...

Jackass is ranked on...

#544 of 2,297 The Greatest TV Shows Of All Time 1.5M VOTES Choosing the best TV shows of all time means taking into account the best TV dramas, the best TV comedies, the best cartoons...
#263 of 590 People who voted for Jackass... People on the West Coast are 2x more likely to vote for this also upvote Star Wars Franchise on The Best Movies of All Time The Best TV Theme Songs of All Time 323.2k VOTES The best TV theme songs and TV intros of all time will take you back to some of the greatest moments in TV. Television theme...
#143 of 383 People who voted for Jackass... also upvote Dark Knight Franchise on The Best Movies of All Time The Best TV Shows of The Last 20 Years 1.5M VOTES This best TV show list represents the combined opinions of thousands of TV fans. Anyone can vote on this list of the best TV...
#63 of 254 The Best Reality TV Shows Ever 170.4k VOTES This is a list of the best reality TV shows on television, the most (often shamefully) addictive reality TV series. From g...
#35 of 56 The Worst TV Show Titles of All Time 991 VOTES A title is incredibly important to a TV show. It's an essential element of branding that viewers need to remember the show, ...
#4 of 17 17 TV Shows That Prove '90s MTV Was The Best MTV 8.6k VOTES Believe it or not, back in the day, MTV used to be awesome. Like, old-school MTV. And not in the snobby, "Oh, you mean ...
#4 of 63 The Best MTV TV Shows 78.5k VOTES MTV used to be all about the music, but now it's turned into a reality television haven. Back in the day, music videos and B...
#2 of 39 The Most Exciting Reality Shows Ever Made 401 VOTES The best reality TV shows ever aired are some of the most exciting series to watch on television, but which are the most exc...