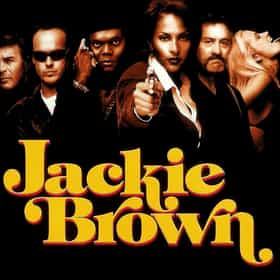 Jackie Brown is a 1997 drama film written and directed by Quentin Tarantino. It is an adaptation of Elmore Leonard's 1992 novel Rum Punch, the first adaptation from Tarantino, and stars Pam Grier in the title role. The film pays homage to 1970s blaxploitation films, particularly the films Coffy and Foxy Brown, both of which also starred Grier in the title roles. The film's supporting cast includes Robert Forster, Robert De Niro, Samuel L. Jackson, Bridget Fonda and Michael Keaton. It was Tarantino's third film following his successes with Reservoir Dogs and Pulp Fiction. Grier and Forster were both veteran actors but neither had performed a leading role in many years. ... more on Wikipedia

The Best Jackie Brown Movie Quotes 49 votes The best Jackie Brown quotes make you realize how great the movie really is, even if you haven't seen it in a while. Let's r...

Jackie Brown is ranked on...

Jackie Brown is also found on...