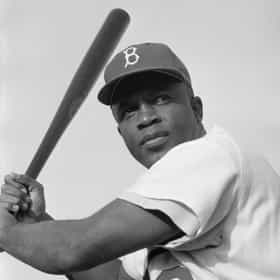 Jack Roosevelt Robinson (January 31, 1919 – October 24, 1972) was an American professional baseball player who became the first African American to play in Major League Baseball (MLB) in the modern era. Robinson broke the baseball color line when he started at first base for the Brooklyn Dodgers on April 15, 1947. When the Dodgers signed Robinson, they heralded the end of racial segregation in professional baseball that had relegated black players to the Negro leagues since the 1880s. Robinson was inducted into the Baseball Hall of Fame in 1962.During his 10-year MLB career, Robinson won the inaugural Rookie of the Year Award in 1947, was an All-Star for six consecutive seasons from ... more on Wikipedia

Jackie Robinson is ranked on...

Jackie Robinson is also found on...