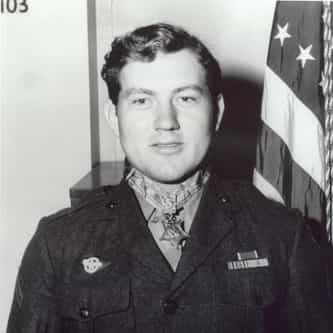 Jacklyn Harrell "Jack" Lucas (February 14, 1928 – June 5, 2008) was an American Marine in World War II who was awarded the Medal of Honor at the age of 17 years as a private first class in the Marine Corps during the Battle of Iwo Jima. During a close firefight in two trenches between Lucas and three Marines with 11 Japanese soldiers, Lucas saved the lives of the other three Marines from two enemy hand grenades that were thrown into their trench by unhesitatingly placing himself ... more on Wikipedia

Jacklyn H. Lucas IS LISTED ON