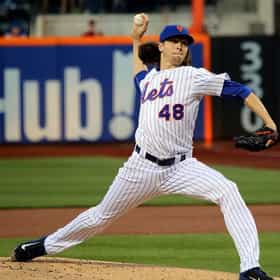 Jacob Anthony deGrom (born June 19, 1988) is an American professional baseball pitcher for the New York Mets of Major League Baseball (MLB). Prior to playing professionally, deGrom attended Stetson University and played college baseball for the Stetson Hatters. DeGrom began playing baseball as a shortstop and was converted into a pitcher during his junior year at Stetson. The Mets selected him in the ninth round of the 2010 MLB draft, and he made his MLB debut with the Mets on May 15, 2014. That year, deGrom was named the National League's (NL) Rookie of the Month twice, and the NL Rookie of the Year. In 2015, 2018, and 2019 deGrom was selected as an MLB All-Star. In 2018, deGrom was ... more on Wikipedia

Jacob deGrom is ranked on...

#6 of 286 The Top Current Baseball Players 219.5k VOTES Who do you think should make the list of the best current players in baseball? Ranked by fans, critics, and sports analysts,...
#138 of 281 The Best Starting Pitchers of All Time 63.9k VOTES The best starting pitchers in baseball history have one vital quality in common: their ability to win. There are so many dif...
#9 of 206 The Greatest New York Mets of All Time 38.2k VOTES List of the best-ever New York Mets players from throughout the club's long and storied history. In 1962, the Mets were foun...
#27 of 30 The Greatest Hitting Pitchers in Baseball History 1.9k VOTES Going down as one of the greatest hitting pitchers in baseball history is a difficult feat, especially when you consider a m...
#11 of 48 Who Will Win the 2019 National League MVP? 2.6k VOTES The race for 2019 National League MVP is stacked. With Bryce Harper and J.T. Realmuto jumping ship to the Philadelphia Phill...
#110 of 202 The All-Around Best Athletes of 2018 32.9k VOTES When it comes to being an all-around best athlete, you're not just talking about the leading scorers of all time, or th...
#3 of 123 The Best Current MLB Pitchers 73.5k VOTES Who are the best current MLB pitchers? Who's the most dominant pitcher of the entire season? That remains to be seen, b...
#1 of 43 The Best MLB Rookies of 2014 1.2k VOTES Who is the best MLB rookie of 2014? This list includes first year players of all positions and backgrounds, from both the ...
#1 of 41 Who Will Win the 2019 National League Cy Young? 908 VOTES UPDATE: Mets starter Jacob deGrom won his second straight NL Cy Young award, beating out finalists Max Scherzer and Hyun-Jin...