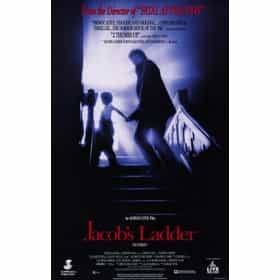 Jacob's Ladder is a 1990 American psychological horror film directed by Adrian Lyne, written and produced by Bruce Joel Rubin and starring Tim Robbins, Elizabeth Peña and Danny Aiello. The film's protagonist, Jacob, is a Vietnam veteran whose experiences prior to and during Vietnamresult in strange, fragmentary flashbacks and bizarre hallucinations that continue to haunt him. As his ordeal worsens, Jacob desperately attempts to figure out the truth. Jacob's Ladder was made by Carolco Pictures ten years after being written by Rubin. ... more on Wikipedia

Jacob's Ladder is ranked on...

Jacob's Ladder is also found on...