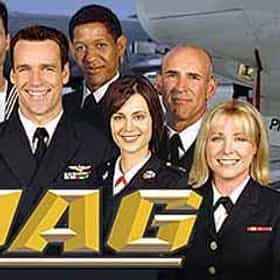 JAG is an American legal drama television show with a distinct U.S. Navy theme, created by Donald P. Bellisario, and produced by Belisarius Productions in association with Paramount Network Television. The first season was co-produced with NBC Productions. Originally perceived as a Top Gun meets A Few Good Men hybrid series, the pilot episode of JAG first aired on NBC on September 23, 1995, but the series was later canceled on May 22, 1996, after finishing 79th in the ratings, leaving one episode unaired. Rival network CBS picked up the series for a midseason replacement, beginning on January 3, 1997. For several seasons, JAG climbed in the ratings and was on the air for nine ... more on Wikipedia