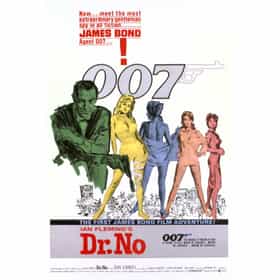 The James Bond film series is a British series of spy films based on the fictional character of MI6 agent James Bond, "007", who originally appeared in a series of books by Ian Fleming. It is one of the longest continually-running film series in history, having been in on-going production from 1962 to the present (with a six-year hiatus between 1989 and 1995). In that time Eon Productions has produced 24 films, most of them at Pinewood Studios. With a combined gross of over $7 billion to date, the films produced by Eon constitute the fourth-highest-grossing film series. Six actors have portrayed 007 in the Eon series, the latest being Daniel Craig. ... more on Wikipedia

James Bond Franchise is ranked on...

#11 of 118 The Very Best Movie Franchises 300.4k VOTES The best movie franchises of all time have brought us some of the best movies ever as well as some billion dollar films and ...
#18 of 20 We Asked, You Answered: Which Movie Franchise Needs To Die? 29.3k VOTES Movie studios are always looking for that major billion-dollar franchise. In the studios' search for the next Marv...
#215 of 241 Critically Acclaimed Movies That Kinda Suck 100.7k VOTES List of supposedly great films that actually kind of suck. This list includes films that have won or been nominated for Osca...
#3 of 376 The Greatest Movie Themes 80.2k VOTES A memorable movie theme song is an underrated crucial element that helps turn a great movie into an iconic one. At its core,...
#6 of 29 The All-Round Greatest Action Film Franchises, Ranked 14.4k VOTES Yippee ki-yay, here are the best action movie series. Featuring martial arts movies, action comedies, spy thrillers, and mor...
#19 of 20 Movie Franchises You Need To Stop Watching 2.3k VOTES Hollywood is a well-oiled machine when it comes to producing expansive cinematic universes and film franchises. Some of the ...
#9 of 11 Films That Could Use A Pre-Credit Scroll 249 VOTES If you’re a movie fan, then you know that modern American cinema is all about the franchise. The more movies and stars ...
#9 of 22 The Best Film Franchises Based on Books 547 VOTES From stories that jump off the page to slow burners that make you contemplate the great beyond, this list includes informati...
The Highest Grossing Movie Franchises of All Time 20.4k VIEWS All the highest grossing movie franchises of all time in one convenient list of the top grossing movie franchises ever. The ...