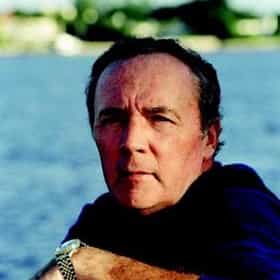 James Brendan Patterson (born March 22, 1947) is an American author and philanthropist. Among his works are the Alex Cross, Michael Bennett, Women's Murder Club, Maximum Ride, Daniel X, NYPD Red, Witch and Wizard, and Private series, as well as many stand-alone thrillers, non-fiction and romance novels. His books have sold more than 300 million copies and he was the first person to sell 1 million e-books. In 2016, Patterson topped Forbes's list of highest-paid authors for the third consecutive year, with an income of $95 million. His total income over a decade is estimated at $700 million.In November 2015, Patterson received the Literarian Award from the National Book Foundation, which ... more on Wikipedia

James Patterson is ranked on...

#50 of 226 People who voted for James Patterson... also upvote Harry Potter Franchise on The Best Movies of All Time The Greatest Living Writers & Most Famous Authors Today 59.9k VOTES If you consider yourself a bibliophile, this list of the absolute best living authors should be of great interest to you. It...
#387 of 529 Things That Are Not As Cool As People Think They Are 1.1M VOTES Jorts are the dumbest things I've ever seen. Next to Toms shoes. Next to the Toyota Prius. Next to d-bags taking pictures of...
#319 of 383 The Greatest American Writers of All Time 65.3k VOTES Who are the greatest American authors of all time? In just two short centuries, the great U.S. of A. has produced an incredi...
#238 of 313 Famous People Most Likely to Live to 100 13.8k VOTES Sometimes, age really is just a number. But these healthy old celebrities seem to be defying time like no others. These clas...
#31 of 84 The Best Mystery Authors 5.6k VOTES List of the best mystery authors that include the novelists, poets and movie script writers. The list features the writer of...
#28 of 34 Authors Like Janet Evanovich 549 VOTES Authors like Janet Evanovich include writers whose novels are similar, offering readers a hefty dose of humor along with the...
#4 of 20 Authors You Pretend Not To Like 846 VOTES E.L. James's Fifty Shades of Grey is as controversial as it is popular, thanks to its infamous romanticizing of so...
The Most Powerful Celebrities With Highest Social Site Ranking 123.7k VIEWS The Power List ranks the top 100 most powerful celebrities on social networking sites. The richest actors, actresses, athlet...
The List of Famous People Named James 97.5k VIEWS List of famous people named James, along with photos. How many celebrities named James can you think of? The famous James' b...
100 Most Popular Celebrities: Radio & TV Survey Rankings 8.7k VIEWS Using figures from the Forbes Celebrity 100, the richest actors, actresses, athletes, musicians and media power players are ...

James Patterson is also found on...