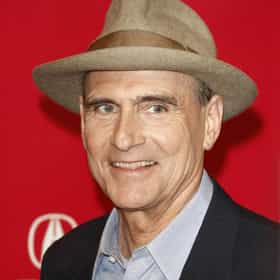 James Vernon Taylor (born March 12, 1948) is an American singer-songwriter and guitarist. A five-time Grammy Award winner, he was inducted into the Rock and Roll Hall of Fame in 2000. He is one of the best-selling music artists of all time, having sold more than 100 million records worldwide.Taylor achieved his breakthrough in 1970 with the No. 3 single "Fire and Rain" and had his first No. 1 hit in 1971 with his recording of "You've Got a Friend", written by Carole King in the same year. His 1976 Greatest Hits album was certified Diamond and has sold 12 million US copies. Following his 1977 album, JT, he has retained a large audience over the decades. Every album ... more on Wikipedia

James Taylor is ranked on...

James Taylor is also found on...