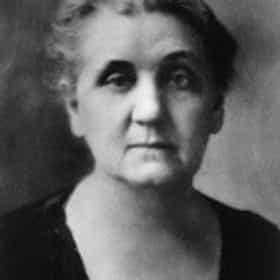 Jane Addams (September 6, 1860 – May 21, 1935) was an American settlement activist, reformer, social worker, sociologist, public administrator, and author. She was a notable figure in the history of social work and women's suffrage in the United States and an advocate for world peace. She co-founded Chicago's Hull House, one of America's most famous settlement houses. In 1910, Addams was awarded an honorary master of arts degree from Yale University, becoming the first woman to receive an honorary degree from the school. In 1920, she was a co-founder for the ACLU. In 1931, she became the first American woman to be awarded the Nobel Peace Prize, and is recognized as the founder of the ... more on Wikipedia

Jane Addams is ranked on...

#191 of 316 The Most Inspiring (Non-Hollywood) Female Role Models 84.5k VOTES Who run the world? Girls! After compiling this list, we're positive that ladies all over the planet are kicking ass and ta...
40+ Celebrities Who Have Had Mastectomies 96.8k VIEWS For whatever reason, we look to celebrities as examples and role models. We watch their every move and the gossip blogs keep...
Famous People Named Jane 31.4k VIEWS List of famous people named Jane, along with photos. How many celebrities named Jayne can you think of? The famous Janes bel...
List of First Wave Feminists 40.5k VIEWS This is a list of feminists who were a part of 1st wave feminism, my favorite feminist movement. I've included lots of photo...

Jane Addams is also found on...