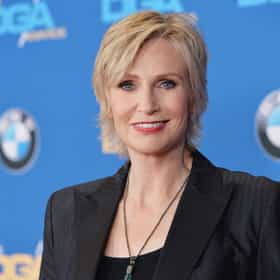 Jane Marie Lynch (born July 14, 1960) is an American actress, voice actress, author, singer and comedian. She is best known for her role as Sue Sylvester in the musical television series Glee. She also gained fame in Christopher Guest's improv mockumentary pictures such as Best in Show.A native of Dolton, Illinois, Lynch's television cameos include an appearance in the Nickelodeon situation comedy iCarly and the Showtime dark comedy series Weeds. Lynch had a recurring role in the Warner Bros. situation comedy Two and a Half Men from 2004 to 2014 and was nominated for a Primetime Emmy Award for her performance in 2010. She has also had other notable roles in numerous mainstream ... more on Wikipedia

Jane Lynch is ranked on...

#101 of 150 Celebrities Hollywood Forced on Us 208.2k VOTES What is it with Hollywood trying its hardest to shove certain actors down everyone's throats? Now, more than ever, there are...
#319 of 942 The Best Actresses in Film History 1.1M VOTES The best actresses ever are ranked here in this list of the best actresses in film history. These are the greatest actresses...
#19 of 297 People who voted for Jane Lynch... People under 30 are 2x more likely to vote for this also upvote Harry Potter Franchise on The Most Rewatchable Movies The Funniest Female Comedians of All Time 256.3k VOTES The funniest female comedians star on our favorite sitcoms, perform standup at the top comedy clubs and best of all, make us...
#809 of 1,452 Celebrity Death Pool 2018 477.7k VOTES Welcome to Celebrity Death Pool 2018! In increasingly uncertain times, there remains one constant in life - we all die. Cele...
#28 of 82 Celebrities You Think Are The Most Humble 56.1k VOTES Humble: to have or show a low estimate of one's own importance. Humility is a rare virtue, particularly in a socia...
#44 of 100 Celebrating The Funniest Women Of The 2010s 3k VOTES Let’s look back on the funniest actresses of the decade, such as Tina Fey of 30 Rock, Amy Poehler of Parks and Recreation, a...
#3 of 40 The Greatest Gay Icons in Film 21.9k VOTES Gay icons from the world of film come in all shapes and sizes. Some are film actors who work to promote gay rights...
#18 of 21 The Most Beautiful Girls On 'Glee' 26.7k VOTES The most attractive Glee girls include those women that are positively radiant in the halls of William McKinl...
#13 of 29 All The Insanely Famous People Who Guest Starred On Veronica Mars 447 VOTES When it comes to picking your favorite, there is certainly no shortage of Veronica Mars guest stars to choose from. Dur...
#20 of 150 Who Do You Wish Would Guest Star on the Muppet Show? 7.6k VOTES Following their brand-new big screen Disney adventure, "The Muppets," Jim Henson's stable of beloved felt characte...
#21 of 31 The Best Celebrity Surprises From The Ellen Show 636 VOTES This is a list of the best celebrity surprises from The Ellen DeGeneres Show. As the queen of daytime talk, Ellen DeGen...
#12 of 57 Who Was America's Crazy Aunt in 2015? 5.1k VOTES Everyone has a crazy aunt. That sister your mom rarely talks about, but who you think is the most fun person in the world. I...
Famous Cancer Female Celebrities 63.5k VIEWS Comfortable surfing the ebb and flow of emotion and weaving their feelings into their creativity, those born under the sign ...
#60 of 156 The Best People Who Hosted SNL In The 2010s 1.4k VOTES Despite cast changes, Saturday Night Live in the 2010s found a new kind of balance and settled comfortably into their cold o...
Famous People Named Jane 30.7k VIEWS List of famous people named Jane, along with photos. How many celebrities named Jayne can you think of? The famous Janes bel...
People You Forgot Guest Starred on Gilmore Girls 32.7k VIEWS To say that Gilmore Girls had a huge impact on pop culture would be an understatement. This little mother-daughter show buil...
Gay Actors Who Play Straight Characters 11M VIEWS This list of gay actors who play straight characters is loosely ranked by fame and popularity. One of the great things about...
Famous People Whose Last Name Is Lynch 4.7k VIEWS Being a fairly common name, it's no surprise there are a lot of famous people with the last name Lynch. Do you recognize all...
#24 of 39 The Funniest Improv Comedians of All Time 8.3k VOTES This list contains information about the best improv comedians, loosely ranked by user votes. The best improvisational com...
Female Celebrities Who Are 6’0" 12.6k VIEWS This list contains examples of female celebs who are 6'0" loosely ranked by fame and popularity. Standing above the ave...
99 Celebrities Who Went to Ivy League Schools 380.7k VIEWS Celebrities who went to Ivy League schools are those smarty pants actors, musicians, and other famous people in the entert...
Actors in the Most Christopher Guest Movies 1.1k VIEWS Christopher Guest has created his own brand of improvisational comedy with his mockumentary style films. He regularly works ...

Jane Lynch is also found on...