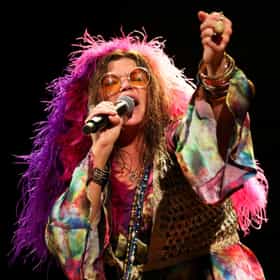 Janis Lyn Joplin (January 19, 1943 – October 4, 1970) was an American rock, soul, and blues singer-songwriter, and one of the most successful and widely known rock stars of her era. After releasing three albums, she died of a heroin overdose at the age of 27. A fourth album, Pearl, was released in January 1971, just over three months after her death. It reached number one on the Billboard charts. In 1967, Joplin rose to fame following an appearance at Monterey Pop Festival, where she was the lead singer of the then little-known San Francisco psychedelic rock band Big Brother and the Holding Company. After releasing two albums with the band, she left Big Brother to continue as a solo ... more on Wikipedia

Fascinating Stories From Janis Joplin's Personal Life 591.5k views Even after more than 50 years, Janis Joplin's songs continue to resonate with music fans across the world. When she was aliv...
The Tortured, Painful Life of Janis Joplin, The Baddest Woman In Rock History 554.3k views Long before the phenomenon that was Amy Winehouse, whose mesmerizing voice captivated millions, there was Janis Joplin, to w...
The Many Loves of Janis Joplin 2.1k views She was a massive rockstar, so it’s no surprise that the list of people Janis Joplin dated is quite long. Janis Joplin exes ...
The Best Janis Joplin Albums of All Time 434 votes There's no question that Janis Joplin is one of the best female rock singers of all time, but what are her greatest albums? ...

Janis Joplin is ranked on...

Janis Joplin is also found on...