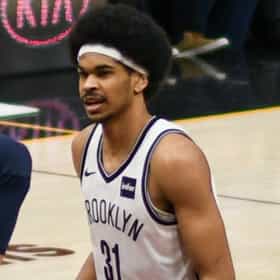 Jarrett Allen (born April 21, 1998) is an American professional basketball player for the Brooklyn Nets for the National Basketball Association (NBA). He played college basketball for the Texas Longhorns. On November 17, 2018, Allen recorded a career-high 24 points and grabbed 11 rebounds in a 127–119 loss to the Los Angeles Clippers. On November 20, he grabbed a season-high 14 rebounds and scored 13 points as the Nets defeated the Miami Heat. On January 16, 2019, Allen recorded 20 points and a career-high 24 rebounds in the Nets' 145–142 overtime victory over the Houston Rockets. ... more on Wikipedia

Jarrett Allen is ranked on...

#138 of 168 The Greatest NBA Centers of All Time 88.9k VOTES Throughout basketball history, having a franchise center has been a crucial part of building a championship team. The best&n...
#38 of 71 The Best Sleeper Picks For Your Fantasy Basketball Team In 2019-2020 2.7k VOTES The best fantasy basketball sleepers can be the picks in any draft that could make or break your season. Everyone wants to t...
#733 of 858 The Top NBA Players Of All Time 1.9M VOTES When it comes to the top NBA players of all time, there's plenty of speculation and room for debate, though many may not thi...
#140 of 175 The Greatest Power Forwards in NBA History 85k VOTES The greatest power forwards in NBA history are listed here on this list of the best power forwards of all time, ranked by lo...
#4 of 25 The Coolest Hairstyles In The NBA Today 949 VOTES The NBA is a league known as much for its style as its competive play, and one place professional basektball players always ...
#29 of 61 The Best NCAA Centers of the 2010s 375 VOTES These are the best 2010s NCAA centers. From Andre Drummond to Nerlens Noel, there are a lot of future NBA stars with this li...
#25 of 30 NBA Players Who Should Finally Do The Slam Dunk Contest 426 VOTES The 2020 NBA Slam Dunk Contest will take place in Chicago during All-Star Weekend. Dwight Howard is the big confirmed name l...
#11 of 161 The Best NBA Players from Texas 4.3k VOTES Here are the best NBA players from Texas. Featuring Hall of Fame greats, superstars, and active players, this list of b...
#21 of 73 The Best Current NBA Defenders 53.4k VOTES Who are the best defenders currently in the NBA? Certainly, this list includes some of the best defensive players&...
#24 of 45 Who Will Win The 2020 NBA Defensive Player Of The Year Award? 8.8k VOTES The field is wide open for the NBA Defensive Player of the Year award in 2020. Today’s NBA landscape features faster of...
#5 of 45 The Best Brooklyn Nets First-Round Picks In The NBA Draft 170 VOTES All Brooklyn Nets draft picks have played a role in the franchise getting to where it is today. While the Nets have&nbs...