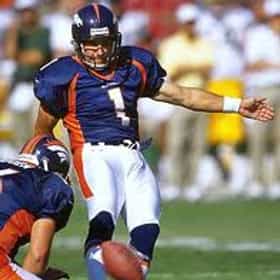 Jason Elam (born March 8, 1970) is a former American football placekicker. He was drafted by the Denver Broncos in the third round of the 1993 NFL Draft and played 15 seasons with the Broncos and two with the Atlanta Falcons.A three-time Pro Bowl selection, Elam won two Super Bowl rings with the Broncos and was tied with Tom Dempsey, Sebastian Janikowski and David Akers for the longest field goal in NFL history at 63 yards before it was broken by another Bronco, Matt Prater, on December 8, 2013, with a 64-yard field goal. ... more on Wikipedia

Jason Elam is ranked on...

Jason Elam is also found on...