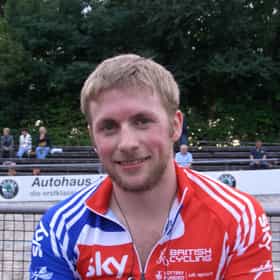 Jason Francis Kenny, (born 23 March 1988) is a British track cyclist, specialising in the individual and team sprints. After winning multiple World and European Junior titles in 2006 and achieving medals in the under 23 European championships in 2007, Kenny was selected ahead of Ross Edgar to compete for Great Britain at the 2008 Summer Olympics in Beijing. Along with Chris Hoy and Jamie Staff, he won a gold medal in the team sprint, breaking the world record in the qualifying round. He finished behind team-mate Chris Hoy in the final of the individual sprint, gaining a silver medal. In January 2012, he gained his first world championship title, after Grégory Baugé's ... more on Wikipedia

Jason Kenny is ranked on...

#22 of 71 Who Is The Most Famous Athlete In The World Right Now? 27.8k VOTES When it comes to the most famous athletes in the world right now, a select few names easily top the list. Not only that...
#2 of 84 The Best Olympic Athletes in Track Cycling 814 VOTES List of the best track cycling Olympic athletes of all time, with photos of the athletes when available. The famous track cy...
Famous People Named Jason 56.1k VIEWS List of famous people named Jason, along with photos. How many celebrities named Jason can you think of? The famous Jasons b...

Jason Kenny is also found on...