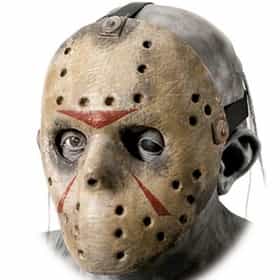 Jason Voorhees is a fictional character from the Friday the 13th series. He first appeared in Friday the 13th as the young son of camp cook, Mrs. Voorhees, in which he was portrayed by Ari Lehman. Created by Victor Miller, with contributions by Ron Kurz, Sean S. Cunningham, and Tom Savini, Jason was not originally intended to carry the series as the main antagonist. The character has subsequently been represented in various other media, including novels, comic books, and a cross-over film with another iconic horror film character, Freddy Krueger. ... more on Wikipedia

Jason Voorhees is ranked on...

#11 of 961 People who voted for Jason Voorhees... also upvote Harry Potter Franchise on The Best Movies of All Time also upvote Friday the 13th Franchise on The Greatest Horror Films of All Time The Greatest Movie Villains of All Time 1.2M VOTES While some of us tend to despise movie villains, plenty of movie-goers favor some of these antagonists. Whether that's ...
#23 of 24 Villains People Find Weirdly Attractive (Even Though They Know It's Wrong) 60.4k VOTES People love to live dangerously, which probably leads many of you out there to lust after fictional villains from pop cultur...
#10 of 25 25 Things You Love That Were Accidents 7k VOTES Everything has an origin story. From superheroes, to whatever you had for breakfast, someone sat down and said, “I am going ...
#2 of 74 People who voted for Jason Voorhees... also upvote Friday the 13th Franchise on The Greatest Horror Films of All Time also upvote A Nightmare on Elm Street Franchise on The Greatest Horror Films of All Time The Most Utterly Terrifying Figures in Horror Films 155.7k VOTES This is a list of the most chillingly terrifying figures in film, as ranked and voted on by horror fans. There are a lot of ...
#13 of 53 53 Behind The Scenes Photos Of Movie Villains 176.6k VOTES Some of the greatest movie villains can give you nightmares if you spend too much time thinking about their faces. But ...
#5 of 18 Horror Villains Who Are Ruined By Having Backstories 43k VOTES Horror movie villains are something of an anomaly in the film world; more often than not, the less you know about them, the ...
#2 of 15 The Greatest Masked Villains 10.1k VOTES Masks have been popular in all forms of entertainment since... there's been entertainment. They were one of the first, if no...
#2 of 30 Funny Full Names of Nefarious Villains 4k VOTES Haven’t you ever wondered about the full names of villains? No one is actually named “Leatherface” or “Ultron.” That’s why ...
#6 of 11 The Best Mortal Kombat X Character 3.4k VOTES Mortal Kombat X is a fighting game from the franchise of NetherRealm Studios. As usual, there's blood and gut...
#2 of 32 The Greatest Zombie Characters of All Time 1.1k VOTES For this poll we've created a list of the greatest zombies of all time, featuring zombies you know from movies, television, ...
#3 of 55 Fictional Characters Named Jason 1k VOTES List of notable fictional characters whose name is Jason, including photos when available. The fictional characters named Ja...
#3 of 25 The Greatest '80s Horror Villains 649 VOTES Lock the door, grab a friend, and turn on all the lights as we rank the best 80s horror villains. The 1980s saw a surge of h...
Horror Movie Villains with High Kill Counts 217.1k VIEWS We all (occasionally) enjoy watching people get slain in horror films, but we seldom think of the villain's overall kil...
#2 of 27 The Best Characters In Slasher Movies 2k VOTES All of the best slasher movies understand one simple rule: it's the characters that make a film great. No matter how many ch...

Jason Voorhees is also found on...