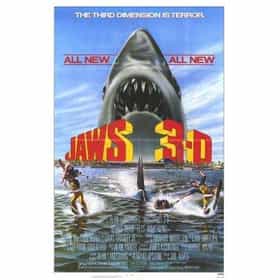 Jaws 3-D is a 1983 American horror thriller film directed by Joe Alves and starring Dennis Quaid, Bess Armstrong, Lea Thompson and Louis Gossett, Jr. It is the second sequel to Steven Spielberg's Jaws, which was based on the novel by Peter Benchley and is the third installment in the Jaws franchise. It is also the only one in the series not made directly by Universal, and one of the few theatrical films produced by Alan Landsburg Productions. The film is notable for making use of 3D film during the revived interest in the technology in the 1980s, amongst other horror films such as Friday the 13th Part III and Amityville 3D. Cinema audiences could wear disposable cardboard polarized 3D ... more on Wikipedia