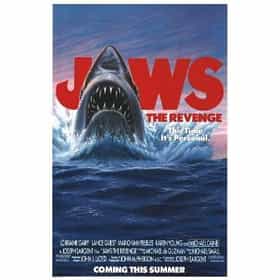 Jaws: The Revenge, is a 1987 American horror thriller film directed by Joseph Sargent. It is the third and final sequel to Steven Spielberg's Jaws and the fourth and final installment in the Jaws franchise. The film focuses on Ellen Brody and her convictions that a shark is preying on her family, particularly when a great white follows her to the Bahamas. Jaws: The Revenge was shot on location in New England and in the Bahamas, and completed on the Universal lot. Like the first two films, Martha's Vineyard was the location of the fictional Amity Island for the opening scenes. Although preceded by Jaws 3-D, Revenge ignores plot elements introduced in that film. Jaws: The Revenge earned ... more on Wikipedia

Jaws: The Revenge is ranked on...

Jaws: The Revenge is also found on...

pg comedy movies, how many baby geniuses movies are there, www bp movie, best family movies on amazon prime, best bass songs of all time, greatest documentaries of all time, australian pop artists, swat movie cast, bug that looks like a scorpion, what is synesthesia