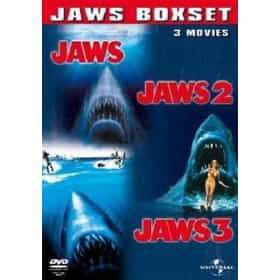 Jaws is an American media franchise that started with a 1974 novel that expanded into four films, a theme park ride, and other tie-in merchandise. The main subject of the franchise is a great white shark, and its attacks on people in specific areas of the United States. The Brody family is featured in all of the films as the primary antithesis to the shark. The original film was based on a novel written by Peter Benchley, which itself was inspired by the Jersey Shore shark attacks of 1916. Benchley would adapt his novel, along with help from Carl Gottlieb and Howard Sackler, into the 1975 film Jaws, which was directed by Steven Spielberg. Although Gottlieb would go on to pen two of the ... more on Wikipedia

Jaws is ranked on...

#24 of 58 The Best Movies for Boys to Watch 8k VOTES The films on this list of the best movies for boys have been ranked as the absolute best by the community when it comes to m...
#2 of 214 The Best Universal Studios Movies List 11.4k VOTES List of Universal Studios movies, ranked best to worst, including trailers, genres, and release dates. Universal Studios pro...

Jaws is also found on...