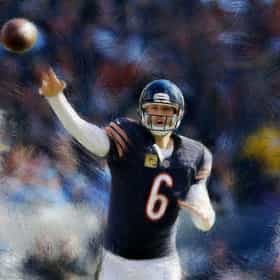 Jay Christopher Cutler (born April 29, 1983) is a former American football quarterback who played in the National Football League for 12 seasons, primarily with the Chicago Bears. He played college football at Vanderbilt and was drafted by the Denver Broncos in the first round of the 2006 NFL Draft, for whom he played for three seasons. In 2009, he was traded to the Bears, where he played for eight seasons. After being released by Chicago in 2017, Cutler initially retired to become a sportscaster for NFL on Fox's television broadcasts, but returned for one more season with the Miami Dolphins when quarterback Ryan Tannehill suffered a season-ending injury. He retired a second time ... more on Wikipedia

Jay Cutler is ranked on...

Jay Cutler is also found on...