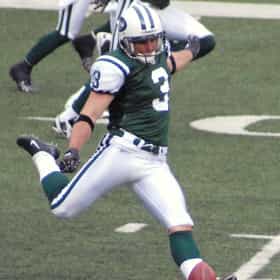 Thomas James "Jay" Feely (born May 23, 1976) is a former American football placekicker. He started his career with the Florida Bobcats in the Arena Football League as a street free agent in 1999 before playing for several NFL teams. Feely was a member of the Tampa Bay Storm, Atlanta Falcons, New York Giants, Miami Dolphins, Kansas City Chiefs, New York Jets, Arizona Cardinals, and Chicago Bears. He was a member of the Pro Football Weekly All-Rookie Team with the Falcons in 2001 and was a Pro Bowl alternate with the Giants in 2005. He played college football at Michigan. ... more on Wikipedia

Jay Feely is ranked on...

Jay Feely is also found on...