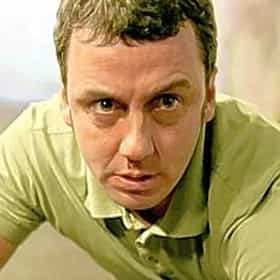 Jay Simpson (born 1967) is a prolific English film, television and stage actor. Simpson is perhaps best known in television for portraying cockney desk sergeant Ian 'Brookie' Brooke in Foyle's War, he has also appeared on television in Recovery with David Tennant and Sarah Parish, Hot Money, Bad Crowd, A Touch of Frost, Casualty, Primeval, The Bill, Peep Show, Rome, Ashes to Ashes, Murder in Suburbia and Soundproof. Jay also uses his charm and voice skills as he is the voice of 'The Tree of Temptation' in Big Brother. His films include Hush Your Mouth, The Holiday, Pride and Prejudice and Erik the Viking and the 1988 TV film The Firm with Gary Oldman. He also voiced a major character, ... more on Wikipedia

Jay Simpson is ranked on...

Famous People Whose Last Name Is Simpson 7.3k VIEWS Being a fairly common name, it's no surprise there are a lot of famous people with the last name Simpson. Do you recognize a...

Jay Simpson is also found on...