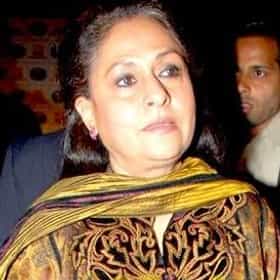 Jaya Bachchan (née Bhaduri; born on 9 April 1948) is an Indian film actress and politician. She is currently the Member of Parliament in Rajya Sabha from the Samajwadi Party, notably serving four terms since 2004. She is recognised as one of the finest Hindi film actresses of her time, particularly known for reinforcing a naturalistic style of acting in both mainstream and "middle-of-the-road" cinema. During her career, she won nine Filmfare Awards: including three for Best Actress and three for Best Supporting Actress, which makes her the overall most-awarded performer in the female acting categories, along with Nutan. She was awarded the Filmfare Lifetime Achievement ... more on Wikipedia