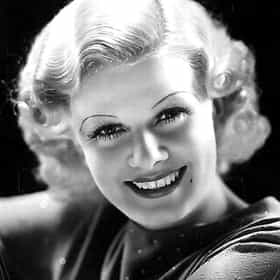 Jean Harlow (born Harlean Harlow Carpenter; March 3, 1911 – June 7, 1937) was an American film actress and sex symbol of the 1930's.She was one of the biggest movie stars in the world. Often nicknamed the "Blonde Bombshell" and the "Platinum Blonde," she was popular for her "Laughing Vamp" movie persona. Harlow was signed by billionaire producer Howard Hughes who directed her first major appearance in Hell's Angels (1930), but she left her contract with Hughes and signed with Metro-Goldwyn-Mayer in 1932. After a series of critically unsuccessful films, Harlow became a leading lady, starring in a string of hits including Red Dust (1932), Dinner at Eight ... more on Wikipedia

The Original Blonde Bombshell Dyed Her Hair With Actual Bleach, And It Likely Ended Up Killing Her 289k views Jean Harlow was the original blonde bombshell. She made a name for herself during the Great Depression in Hollywood after ge...
The Best Jean Harlow Movies 753 votes List of the best Jean Harlow movies, ranked best to worst with movie trailers when available. Jean Harlow's highest grossing...

Jean Harlow is ranked on...

Jean Harlow is also found on...