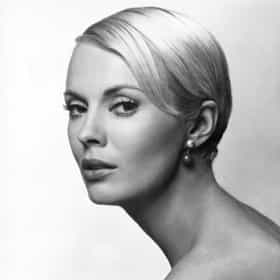 Jean Dorothy Seberg (; French: [ʒɑ̃ seˈbɛʁg]; November 13, 1938 – August 30, 1979) was an American actress who lived half her life in France. Her performance in Jean-Luc Godard's 1960 film Breathless immortalized her as an icon of French New Wave cinema.She appeared in 34 films in Hollywood and in Europe, including Saint Joan, Bonjour Tristesse, Lilith, The Mouse That Roared, Moment to Moment, A Fine Madness, Paint Your Wagon, Airport, Macho Callahan, and Gang War in Naples. She was also one of the best-known targets of the FBI COINTELPRO project. Her targeting was a well-documented retaliation for her support of the Black Panther Party in the 1960s. Seberg died at the age of 40 in ... more on Wikipedia

Breathlessly Tragic Tales From The Life Of French New Wave Icon Jean Seberg 25.2k views When it comes to movie stars with tragic lives, Jean Seberg is up there with the most tragic of them all. Success and cinema...
The True Story Behind 'Seberg,' Kristen Stewart's Jean Seberg Movie 2.5k views

Jean Seberg is ranked on...

#438 of 1,023 The Most Beautiful Women In Hollywood 4.5M VOTES The most beautiful women in the world are a great mix of attractive TV actresses, singers, models, and more, ...
#316 of 940 The Best Actresses in Film History 1.2M VOTES The best actresses ever are ranked here in this list of the best actresses in film history. These are the greatest actresses...
#31 of 3,116 People who voted for Jean Seberg... People outside of the US are 2x more likely to vote for this People in the Northeast are 2x more likely to vote for this The Most Beautiful Women of All Time 132.1M VOTES Here are the most beautiful women of all time ranked not on looks alone, regardless of their talent. Thi...
#119 of 190 The Greatest Actresses Who Have Never Won an Oscar (for Acting) 70.5k VOTES There are many actresses who haven't won an Oscar. For 95 percent of the acting population, there is probably a good reason ...
12 Historically Beloved Figures That J. Edgar Hoover Hated And Tried To Destroy 28.3k VIEWS For six decades, FBI Director J. Edgar Hoover was the most powerful law enforcement figure in the United States. Unfortunate...
Famous People Who Have Been Through Depression 114.7k VIEWS This is a list of famous people with depression, or who have suffered from depression at some point in their lives. Who are ...
Clint Eastwood Loves and Hookups 27.1k VIEWS Who is Clint Eastwood dating? Many famous women have dated Clint Eastwood, and this list will give you more details about th...

Jean Seberg is also found on...