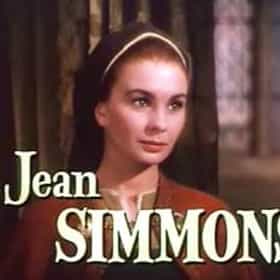 Jean Merilyn Simmons, OBE (31 January 1929 – 22 January 2010) was a British-American actress and singer. One of J. Arthur Rank's "well-spoken young starlets", she appeared predominantly in films, beginning with those made in Great Britain during and after World War II, followed mainly by Hollywood films from 1950 onwards.Simmons was nominated for the Academy Award for Best Supporting Actress for Hamlet (1948), and won a Golden Globe Award for Best Actress for Guys and Dolls (1955). Other notable film appearances included Young Bess (1953), The Robe (1953), Elmer Gantry (1960), Spartacus (1960), and the 1969 film The Happy Ending, for which she was nominated for the Academy ... more on Wikipedia

Jean Simmons is ranked on...

#701 of 1,027 The Most Beautiful Women In Hollywood 4.5M VOTES The most beautiful women in the world are a great mix of attractive TV actresses, singers, models, and more, ...
#122 of 311 Which Actor Would You Bring Back for One Final Movie? 187.5k VOTES We asked, you answered. Fans of the Ranker Facebook page chose which dead actors they’d like to bring back to life for just ...
#63 of 184 The Greatest Actresses Who Have Never Won an Oscar (for Acting) 68.8k VOTES There are many actresses who haven't won an Oscar. For 95 percent of the acting population, there is probably a good reason ...
#24 of 50 76 of Your Grandpa's Hottest Childhood Crushes 60.3k VOTES These photos of your grandfather's hottest childhood crushes are here as a reminder that some of today's Hollywood legends w...
Famous People Whose Last Name Is Simmons 3.4k VIEWS Being a fairly common name, it's no surprise there are a lot of famous people with the last name Simmons. Do you recognize a...

Jean Simmons is also found on...