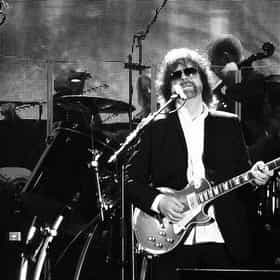 Jeffrey Lynne (born 30 December 1947) is an English songwriter, singer, record producer, and multi-instrumentalist from Birmingham who co-founded the rock band Electric Light Orchestra (ELO). The group formed in 1970 as an offshoot of the Move, of which Lynne was also a member. Following the departure of Roy Wood in 1972, Lynne assumed sole leadership of the band and wrote, arranged and produced virtually all of its subsequent records. Before, Lynne was also involved with the Idle Race as a founding member and principal songwriter. After ELO's original disbandment in 1986, Lynne released two solo albums: Armchair Theatre (1990) and Long Wave (2012). Additionally, he began producing ... more on Wikipedia

Jeff Lynne is ranked on...

Jeff Lynne is also found on...