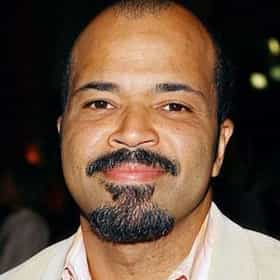 Jeffrey Wright (born December 7, 1965) is an American actor. He is best known for his Tony- and Emmy-winning role as Belize in the Broadway production and HBO miniseries Angels in America. He starred as Jean-Michel Basquiat in Basquiat, Felix Leiter in the James Bond films Casino Royale, Quantum of Solace and No Time to Die, Narcisse in the HBO series Boardwalk Empire, and Beetee in The Hunger Games films. Wright currently stars as Bernard Lowe in the HBO series Westworld. ... more on Wikipedia

Jeffrey Wright is ranked on...

#106 of 180 People who voted for Jeffrey Wright... also upvote Star Wars Franchise on The Best Movies of All Time The Best Living American Actors 273.4k VOTES It takes a lot to make a movie great. There has to be excellent writing, production, direction, editing, and of course, acti...
#27 of 265 People who voted for Jeffrey Wright... People outside of the US are 3x more likely to vote for this The Greatest Male Celebrity Role Models 107k VOTES Male celebrities as role models... what are we looking for? Maybe someone who knows how to lead, be a good team member, or h...
#50 of 56 The Greatest Non-White Actors in Hollywood 3.8k VOTES With audiences pushing Hollywood towards increased diversity both on- and off-screen, now is the perfect time to celebrate t...
#2 of 18 All the Actors Who Have Played Martin Luther King, Jr., Ranked 1k VOTES Dr. Martin Luther King, Jr. had a giant impact in the history of America with his leadership in the Civil Rights Movement. I...
#9 of 19 The Most Surprising Celebrity Cameos On 'Rick And Morty' 1.7k VOTES During the course of multiple seasons and dozens of episodes of Rick and Morty, the duo have met their fair share ...
Famous Boarding School Alumni 39.8k VIEWS List of famous people who went to boarding school, loosely ranked by fame and popularity. For hundreds of years, rich and po...
300+ Famous People Who Went to Prep School 13k VIEWS Many of the most powerful people in the world went to prep school. The children of wealthy parents - often "old money&q...
What The Hunger Games SHOULD Have Looked Like In The Movies 53.1M VIEWS WARNING: SPOILERS ACROSS PANEM. This list discusses The Hunger Games books and the movie adaptations. So if you’re not caugh...
50+ Celebrities Who Turned 50 in 2015 12.7M VIEWS Quick. How much does it cost to buy 50 candles? Because these hot celebs have a big birthday coming up! This list of actor...

Jeffrey Wright is also found on...