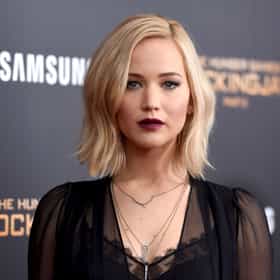 Jennifer Shrader Lawrence (born August 15, 1990) is an American actress. Her films have grossed over $6 billion worldwide, and she was the highest-paid actress in the world in 2015 and 2016. Lawrence appeared in Time's 100 most influential people in the world list in 2013 and in the Forbes Celebrity 100 list in 2014 and 2016. During her childhood, Lawrence performed in church plays and school musicals. At age 14, she was spotted by a talent scout while vacationing in New York City with her family. Lawrence then moved to Los Angeles and began her acting career by playing guest roles in television shows. Her first major role came as a main cast member on the sitcom The Bill Engvall Show ... more on Wikipedia

Jennifer Lawrence is ranked on...

Jennifer Lawrence is also found on...