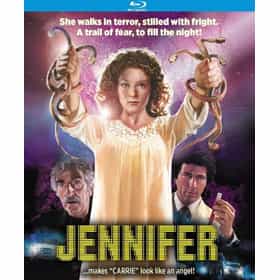 Jennifer is a 1978 horror film directed by Brice Mack, starring Lisa Pelikan. The story has some similarities to the 1976 classic Carrie, about a social misfit with psychic powers who gets revenge on her cruel classmates, although her ability to control snakes is more reminiscent of Willard Stiles's ability to control rats in Willard. The original music score is composed by Porter Jordan. The film's tagline is: "She's got the power... and you haven't got a prayer!" ... more on Wikipedia

Jennifer is ranked on...

#21 of 34 The Best Horror Movies About Psychic Powers 678 VOTES The best psychic horror movies offer an unnerving sense of mystery. They deal with concepts that are both fascinating and sc...

Jennifer is also found on...