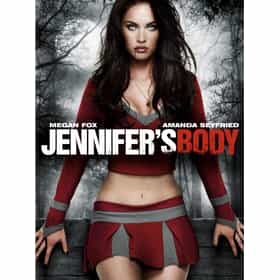 Jennifer's Body is a 2009 black comedy horror film written by Diablo Cody and directed by Karyn Kusama. The film stars Megan Fox, Amanda Seyfried, Johnny Simmons, and Adam Brody. Fox portrays a demonically possessed high school cheerleader who hunts her male classmates, with her best friend striving to stop her. The film premiered at the 2009 Toronto International Film Festival and was released in the United States and Canada on September 18, 2009. The title is a reference to the song of the same name by alternative rock band Hole on their album Live Through This. As a tie-in to the film, Boom! Studios produced a Jennifer's Body graphic novel, released in August 2009. ... more on Wikipedia

Jennifer's Body is ranked on...

#272 of 625 The Greatest Guilty Pleasure Movies 203.9k VOTES   What makes a film a guilty pleasure? This is a movie that you love to watch, but won't display on your DVD shelf......
#228 of 799 People who voted for Jennifer's Body... People under 30 are 3x more likely to vote for this The Best Horror Movies Of All Time 1M VOTES Horror movies, ranked by adrenaline junkies worldwide. Anyone can vote on this CrowdRanked list, and can even add your own f...
#43 of 212 Movies That Turned 10 in 2019 13.2k VOTES Take a trip down memory lane with this list of movies that turned 10 in 2019. Featuring epic war dramas, comic book mov...
#8 of 13 The 13 Most Dangerous Friendships In Horror Movies 4.1k VOTES The title "best friends forever" doesn't always stand the test of time. Friendships in horror films aren...
#2 of 12 Horror Movies With The Most Positive Lesbian And Bisexual Representation 234 VOTES Finding positive LGBTQ+ representation in horror films can be a surprisingly difficult feat. Plenty of low-budget horro...
#10 of 27 27 Horror Films You Had No Idea Were Directed By Women 2.1k VOTES Women have directed more than a few genre-defining horror films. And while the Me Too movement has shown how Hollywood margi...
#16 of 41 The Scariest Movies Set In Schools 3.8k VOTES What is it about a scary school movie that appeals to movie goers? What is it about the thought of a killer psychopath on th...
#41 of 46 The Best Movies About The Occult 1k VOTES The best occult movies are guaranteed to send shivers down your spine. They deal with things that are fundamentally creepy. ...
#61 of 181 The Best Comedy Horror Movies, Ranked 30.6k VOTES Funny horror movies! This is a list list of some of the best comedy horror movies ever made, or horror comedies. Either way ...
#45 of 77 The Greatest Teen Movies of the 2000s 20.2k VOTES Hard rock, Funk rock, Soul, Blues rock
#12 of 27 The Best 2000s Vampire Movies 796 VOTES Are there still quality vampire movies in the 2000s? While some might say that the age of the classic bloodsucker is over,...
#41 of 45 The Best Female Buddy Movies 3.3k VOTES The female buddy movie is an elusive and rare little sister to the buddy cop. It's an under appreciated genre that's always ...
#3 of 17 The Best Megan Fox Movies 3.9k VOTES This is a list of the best Megan Fox movies, ranked best to worst with movie trailers when available. Though she didn't get ...
#18 of 25 Best Chris Pratt Movies 1k VOTES List of the best Chris Pratt movies, ranked best to worst with movie trailers when available. Chris Pratt started his acting...
#5 of 50 The Best Horror Movies of 2009 696 VOTES List of the best 2009 horror movies, ranked by how many upvotes they've received by other fans of the genre. All types of sc...
#117 of 202 The Best R-Rated Black Comedies 1.7k VOTES List of R-Rated black comedies, ranked from best to worst with movie trailers when available. This list takes the best R-Rat...

Jennifer's Body is also found on...