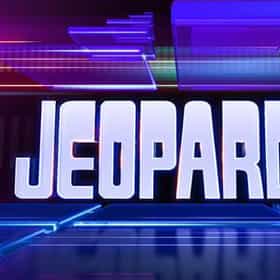 Jeopardy! is an American television game show created by Merv Griffin. The show features a quiz competition in which contestants are presented with general knowledge clues in the form of answers, and must phrase their responses in the form of questions. The original daytime version debuted on NBC on March 30, 1964, and aired until January 3, 1975. A weekly nighttime syndicated edition aired from September 1974 to September 1975, and a revival, The All-New Jeopardy!, ran on NBC from October 1978 to March 1979. A daily syndicated version premiered on September 10, 1984, and is still airing, making it by far the program's most successful incarnation. Both NBC versions and the weekly ... more on Wikipedia

The Twilight Zone
16 Fascinating Facts About What It’s Like To Be A Contestant On Jeopardy 64.5k views Ever wonder what being on Jeopardy! is like? Of course you do; it’s America’s favorite quiz show for a reason! Mel Brooks an...
The Best Jeopardy! Contestants of All Time 14.9k votes Since the first episode of the daily-syndicated version of Jeopardy! in 1984, an incredible number of legendary winners have...
14 Times Alex Trebek Got Sassy 38.1k views Have you always dreamed of having the chance to show off your razor-sharp intelligence on Jeopardy? Are you such a big fan o...
Former 'Jeopardy!' Contestants React To James Holzhauer's Winning Streak 237 votes James Holzhauer – a professional gambler from Las Vegas – is taking the Jeopardy! world by storm. The 34-year-old has manage...
What to Watch If You Love 'Jeopardy!' 139 votes Wondering what to watch after Jeopardy!? If the high stakes world of trivia seen for years on this series has you hungry for...

Jeopardy! is ranked on...

Jeopardy! is also found on...