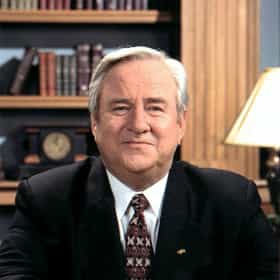 Jerry Lamon Falwell Sr. (; August 11, 1933 – May 15, 2007) was an American Southern Baptist pastor, televangelist, and conservative activist. He was the founding pastor of the Thomas Road Baptist Church, a megachurch in Lynchburg, Virginia. He founded Lynchburg Christian Academy (now Liberty Christian Academy) in 1967 and Liberty University in 1971 and co-founded the Moral Majority in 1979. On May 15, 2007, Jerry Falwell died suddenly of cardiac arrhythmia in his office at Liberty University at the age of 73. He was buried in the grounds of the university he founded. ... more on Wikipedia

Jerry Falwell is ranked on...

#414 of 531 Annoying Celebrities Who Should Just Go Away Already 1.2M VOTES The most annoying celebrities, ranked by entertainment fans themselves. These annoying celebs are obnoxious, overexposed, ...
Famous People Named Jerry 19.1k VIEWS List of famous people named Jerry, along with photos. How many celebrities named Jerry can you think of? The famous Jerrys b...
27 of the Most Famous ESTJs 44.3k VIEWS Many famous actors, musicians, and politicians are believed to be ESTJs (Extraverted Sensing Thinking Judging). ESTJs are kn...
Celebrities with Twins 77.6k VIEWS A List of Celebrities with Twins, with photos! This list includes both fraternal and identical twins. Only 2% of the world's...
Politicians Who Have Blamed Victims During National Tragedies 1.9k VIEWS Victim-blaming may feel like a modern concept, but it’s actually not at all. While the term “victim-blaming” hasn’t been aro...

Jerry Falwell is also found on...