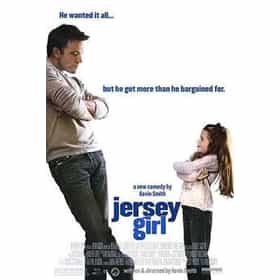 Jersey Girl is a 2004 American comedy-drama film written, co-edited, and directed by Kevin Smith. It stars Ben Affleck, Liv Tyler, Raquel Castro, George Carlin, Jason Biggs, Jennifer Lopez and Will Smith. It is also the second film by Smith not to be set in the View Askewniverse and the first not to feature appearances by Jay and Silent Bob, although animated versions of them appear in the View Askew logo. It is the second film where Ben Affleck and Liv Tyler play a couple, the previous being in the 1998 film Armageddon. ... more on Wikipedia

Jersey Girl is ranked on...

Jersey Girl is also found on...