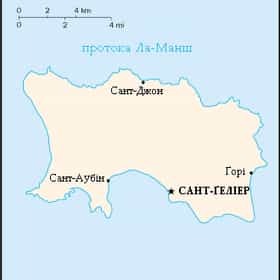 Jersey, officially the Bailiwick of Jersey, is a possession of the Crown in right of Jersey, off the coast of Normandy, France. The bailiwick consists of the island of Jersey, along with surrounding uninhabited islands and rocks collectively named Les Dirouilles, Les Écréhous, Les Minquiers, Les Pierres de Lecq, and other reefs. Jersey was part of the Duchy of Normandy, whose dukes went on to become kings of England from 1066. After Normandy was lost by the kings of England in the thirteenth century, and the ducal title surrendered to France, Jersey and the other Channel Islands remained attached to the English crown. Jersey is a self-governing parliamentary democracy ... more on Wikipedia

Jersey is ranked on...

Jersey is also found on...