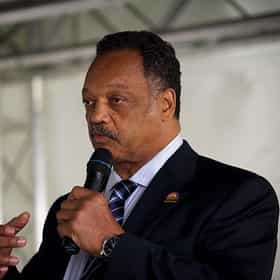 Jesse Louis Jackson Sr. (né Burns; born October 8, 1941) is an American civil rights activist, Baptist minister, and politician. He was a candidate for the Democratic presidential nomination in 1984 and 1988 and served as a shadow U.S. Senator for the District of Columbia from 1991 to 1997. He is the founder of the organizations that merged to form Rainbow/PUSH. Former U.S. Representative Jesse Jackson Jr. is his eldest son. Jackson hosted Both Sides with Jesse Jackson on CNN from 1992 to 2000. ... more on Wikipedia

Jesse Jackson is ranked on...

#14 of 220 Lying Politicians: The Worst Liars In American Politics 434.8k VOTES Do any politicians tell the truth anymore? Maybe, but you won't find them here. This list has the least trustworthy people i...
#48 of 49 People who voted for Jesse Jackson... People in the Northeast are 2x more likely to vote for this also upvote Barack Obama on The Greatest U.S. Presidents of All Time The Best Code Names the Secret Service Has Ever Used 72.5k VOTES While Secret Service code names are a tradition that dates back all the way to the Wilson administration, it's a little know...
#111 of 771 American Public Figures Who Are National Treasures 229.7k VOTES America's national treasures work in different fields, are of different generations, and all have different stories to ...
#339 of 1,445 Celebrity Death Pool 2018 477.7k VOTES Welcome to Celebrity Death Pool 2018! In increasingly uncertain times, there remains one constant in life - we all die. Cele...
#33 of 113 People We Loved to Hate in 2013 40.4k VOTES These are the People we loved to hate in 2013. This list includes a slew of shocking, disheartening and downright dirty happ...
#56 of 98 US Political Figures We Hate the Most: 2013 28.6k VOTES I'm starting this list with the political figures I hate the most, but I'm opening it to voting and to the public. Obviously...
Famous Tall Men Over 6'2 454.2k VIEWS Some of the tallest men in Hollywood may not seem so on your screen. Paired alongside other tall actors, shorts actors weari...
Every Person Who Has Hosted 'Saturday Night Live' 52.4k VIEWS Live from New York! It's Saturday Night! This is a list of all Saturday Night Live hosts, in reverse order,...
Celebrities with Secret Babies 587.2k VIEWS From break babies to long lost illegitimate offspring, some kids have the unique distinction of being secret children of cel...
30 Famous People Who Have Love Children 191.4k VIEWS Several famous actors, musicians, athletes, and politicians have love children. Some of these celebrities took responsibilit...
Famous Freemasons List 1M VIEWS List of Famous Freemasons ranked by fame and popularity. The Freemasons is a fraternal organization that has lodges all over...
26 Celebrities Who Were Class President 27.9k VIEWS The role of class president is important at any school, and the celebrities on this list have all held the office at some po...
Famous Friends Of Aretha Franklin 145 VIEWS Aretha Franklin was a lot of things to a lot of different people. To her fans, she was the Queen of Soul. Over decades, her ...

Jesse Jackson is also found on...