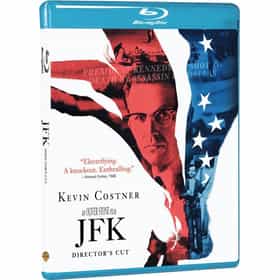 JFK is a 1991 American historical legal-conspiracy thriller film directed by Oliver Stone. It examines the events leading to the assassination of President John F. Kennedy and subsequent cover-up through the eyes of former New Orleans district attorney Jim Garrison. Garrison filed charges against New Orleans businessman Clay Shaw for his alleged participation in a conspiracy to assassinate the President, for which Lee Harvey Oswald was found responsible by two government investigations: the Warren Commission, and the House Select Committee on Assassinations. The film was adapted by Stone and Zachary Sklar from the books On the Trail of the Assassins by Jim Garrison and Crossfire: The ... more on Wikipedia

Every Oscar Winning Film Ever Gay Movies: List of All Gay Films Films Scored By John Williams List of All Movies Released in 1991 Movies Produced by A. Kitman Ho