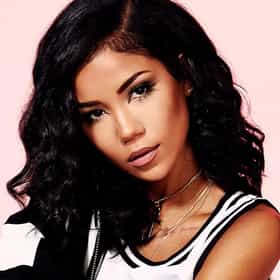 Jhené Aiko Efuru Chilombo, better known as Jhené Aiko or simply Jhené, is an American singer and songwriter. Born and raised in Los Angeles, she began her career appearing in several music videos and contributing vocals for R&B group B2K. At the time, she was known as "Lil' Fizz's cousin", though she is not actually related to him. It was used as a marketing tool, suggested by Sony and Epic Records, to promote Aiko through B2K and attract an audience. In 2003, Aiko was set to release her debut album, My Name Is Jhené, through her labels Sony, The Ultimate Group and Epic, however the album was never released, with Aiko asking to be released from ... more on Wikipedia

The Best Jhené Aiko Albums, Ranked 53 votes We're ranking the best Jhené Aiko albums of all time. One of the best R&B singers of 2019, Jhené Aiko's di...
Jhené Aiko Loves and Hookups 25k views Who is Jhené Aiko dating? Many famous men have dated Jhené Aiko, and this list will give you more details abou...
The Best Songs Feat. Jhene Aiko 199 votes These are the best songs featuring Jhene Aiko. As a solo artist, Jhene Aiko has won awards (BET Award for Centric Award), re...

Jhené Aiko is ranked on...

#596 of 986 The Best Female Vocalists Ever 1.8M VOTES List of the best female singers of all time, ranked by music fans and casual critics like you. Who are the greatest female v...
#223 of 225 The Best Current Female Singers 867.3k VOTES The best female singers currently performing and making some of the best pop songs of 2019 could easily be among the best of...
#298 of 1,452 Celebrity Death Pool 2018 477.7k VOTES Welcome to Celebrity Death Pool 2018! In increasingly uncertain times, there remains one constant in life - we all die. Cele...
#406 of 415 Maxim's Nominees for the 2015 Hot 100 191.4k VOTES Here are Maxim's nominees for the 2015 hot 100. This is the issue of Maxim that gentlemen around the world look forward to m...
#12 of 25 The Best Contemporary Asian American Musicians 160 VOTES Before Mitski, Dumbfoundead, and TOKiMONSTA there were Karen O and Steve Aoki. The higher demand for Asian American rep...
#88 of 108 Who Is The Most Famous Singer In The World Right Now? 407.7k VOTES When it comes to today's most popular music artists, who do you think takes the cake as the most famous singer in the w...
Celebrities You Didn't Know Use Stage Names 1.7M VIEWS List of celebrities with stage names, loosely ranked according to fame and popularity. It's tough to break into show busin...
#84 of 220 The Greatest R&B Artists of All Time 15.5k VOTES When it comes to the pop charts, R&B artists tend to be among the most popular. The best R&B singers have been toppi...
Celebrities Who Are Half-Black And Half-Asian 7.9k VIEWS This is a list of celebrities who are half Black half Asian, loosely ranked by fame and popularity. You will likely recogniz...
#9 of 50 The Best R&B Artists Of 2019, Ranked 27.3k VOTES Dropping some of the hottest smooth jams, here are the best R&B artists of 2019. From rising R&B star...
Famous Pisces Female Celebrities 53.5k VIEWS Intuitive and imaginative, those born under the star sign Pisces have an emotional creativity - no wonder there are so many ...
#15 of 28 The Best Rappers To Listen To If You Like Drake 1.1k VOTES If you're a fan of Drake, here is a list of rappers who make similar music. Known for his catchy hooks and smooth beats...
#34 of 70 The Greatest Black Female Pop Singers 22.3k VOTES You've sung along to their songs countless times, and might have grown up listening to their music. Now it's time to celebra...
Big Sean Loves and Hookups 30.6k VIEWS Who is Big Sean dating? Many famous women have dated rapper Big Sean, and this list will give you more details about these l...
#9 of 26 The Best New R&B Artists Of 2019, Ranked 473 VOTES The best new R&B artists of 2019 are taking the genre to another level. Behind some of the hottest songs in 2019, this r...
#48 of 110 The Best R&B Artists Of The 2010s 1.4k VOTES Here are the best R&B artists of the decade, ranked by fans everywhere. From Frank Ocean and H.E.R. to The Wee...
#14 of 23 The Best Female R&B Singers Of 2020, Ranked 245 VOTES Here are the best female R&B singers of 2020, ranked by fans everywhere. The women on this list are a great place to sta...
Famous People You Didn't Know Were Evangelical Christians 20.4k VIEWS Faith is one of the most important aspects of life for evangelical Christians. Maybe it's that focus on tradition and salv...

Jhené Aiko is also found on...